I have no excuse, really, for neglecting my blog, other than catching up becomes overwhelming after a while and then inertia takes hold and, well, no blog posts.

Since my last post it's been five months. School ended, it got really, horribly, nastily hot, and my enthusiasm for most things went out the window. I don't like heat. But life goes on, and I've managed to get a few things done.

The biggest thing I've done lately is converting my Roman Maze quilt pattern to PDF and listing it on Etsy! I took a new picture of the quilt, since it's been a few years and digital cameras have improved quite a bit since I took the original picture. I've had quite a few requests over the years for a PDF version, but the stars hadn't aligned in the proper formation until I realized that Etsy would be MUCH easier than trying to coordinate things through my web site. Now the challenge is going to be converting my other patterns and getting a new pattern out (I designed it back in 2003, but then we moved, Ryan was born, and the hard drive died, so it's been on the back burner until now).

Let's see, on the knitting/crocheting/spinning front, I've managed to finish a few things.

I participated in the Tour de Fleece but only managed to finish ONE skein during the tour: 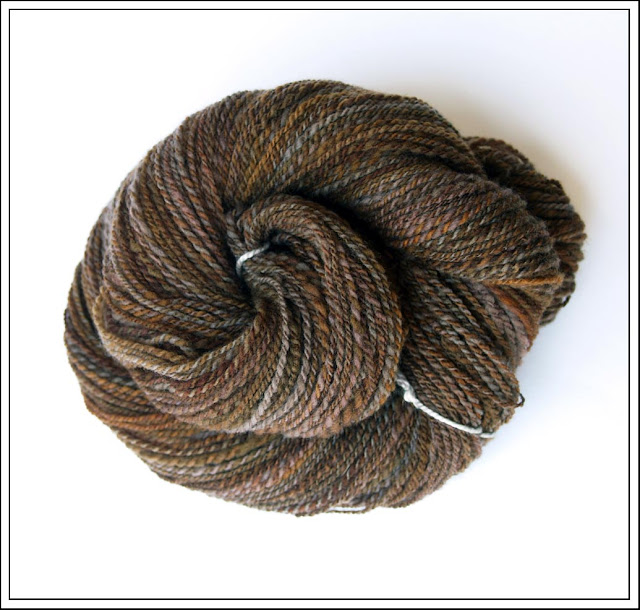 That's a fingering-weight merino two-ply yarn, and it's actually plied from stuff I'd spun a few years ago but hadn't ever plied. I had 8 ounces to begin with and it was early enough in my spinning career that I hadn't done a great job and put it aside. I managed to spin up the rest of it and chain plied it for this gorgeous bulky skein: 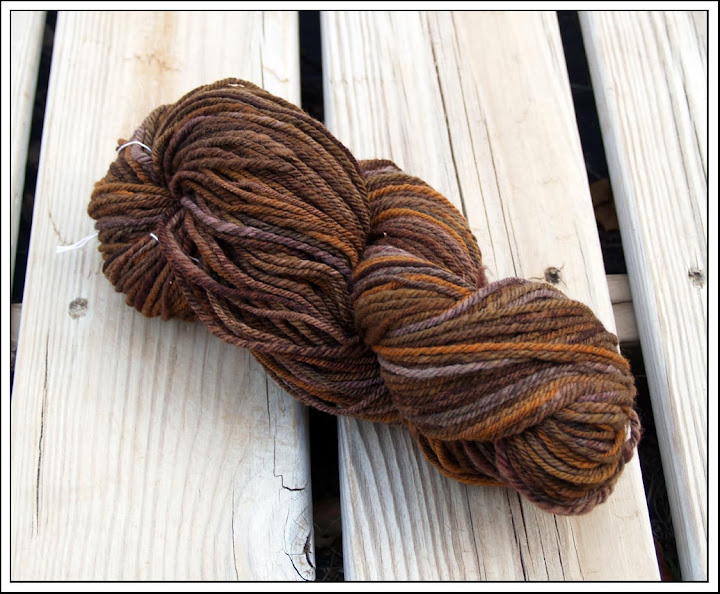 It's fun to see the effect of the two different plying methods on the same roving. (The colors are nicer in person on the chain-plied skein.)

So that's my one skein I started AND finished during the tour. I did spin on other things, as you can see in this collage. 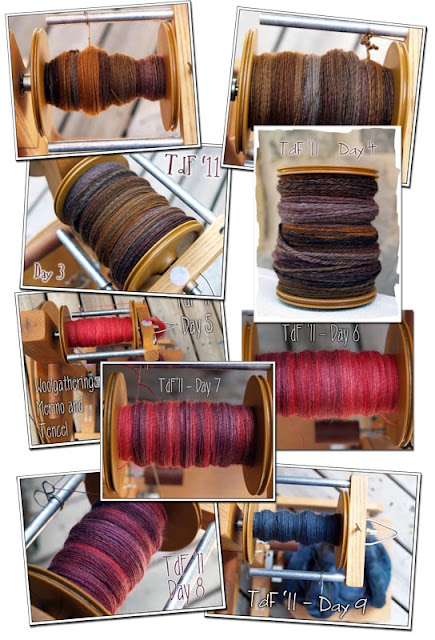 About halfway through the tour the kids and I went to Idaho. I did get some roving—quite a lot, actually—while we were there, but I didn't get any spinning done. (Pictures of Idaho to come.)

I crocheted a necklace/bracelet with pearls: 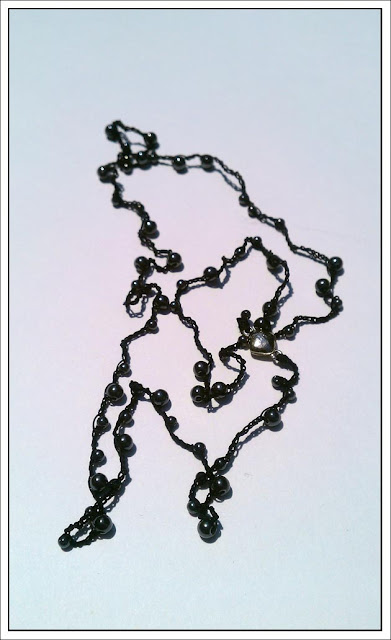 I wear it as a necklace sometimes, or as a bracelet wrapped around my wrist six times.

My first crocheted sweater, a Butterfly Cardigan, using yarn left over from a sweater I knit for Greg about five years ago: 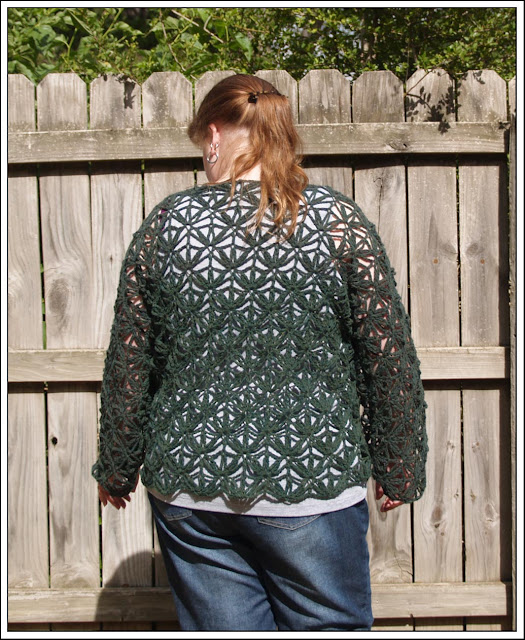 I finished a small shawl using my handspun: 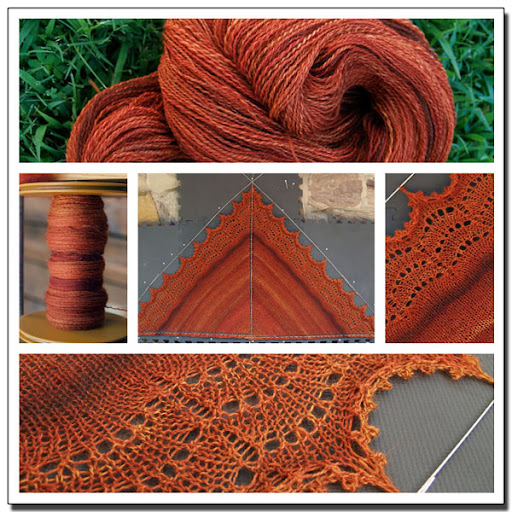 The roving is from Dawning Dreams, and it yelled at me from across the room at Fiber Christmas in July a few years ago. The pattern is Holden Shawlette.

I started a pi shawl and my plan is to put sleeves in it to make a cardigan: 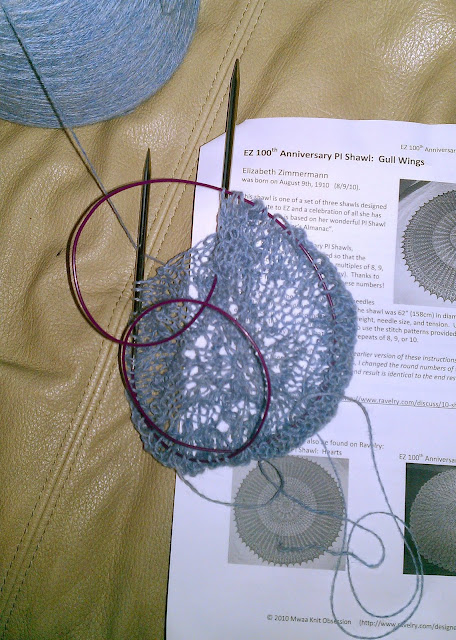 I'm a lot further along on this project than in that picture, but it looks like one big messy pile of yarn at this point so I'm not taking a pic until it's blocked.

There are a few other things I've been working on but I'll post pics of those another time.

In other domestic news, I got into making my own yogurt: 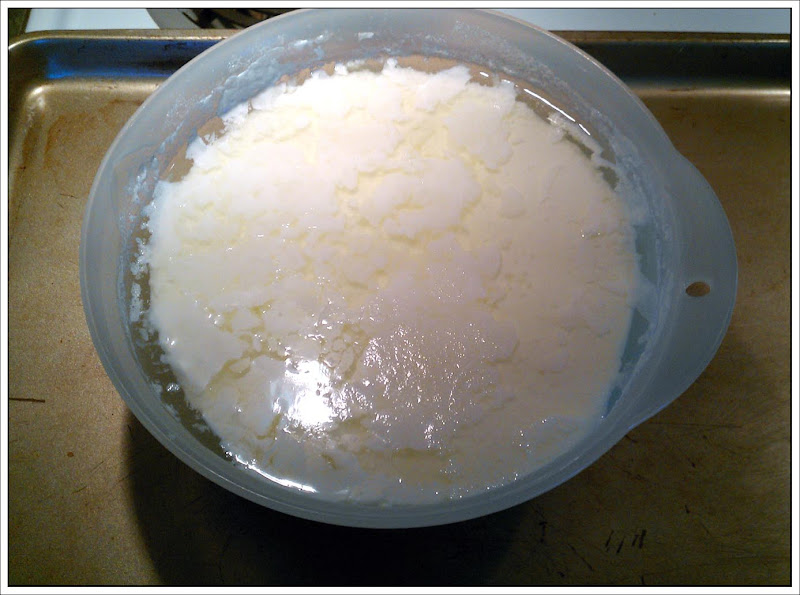 It's really good and really easy! I use this recipe, except that I use the crock from my crockpot, and I use the insulated cover that it came with and put the whole thing in the oven, and I don't strain it any more.

I'm woefully behind on posting pictures of customer quilts but hopefully I'll get my act together on that soon, now that the kids are back in school again. (YAY!!!!)

Happy Labor Day to my U.S.-ian friends, and everyone else, I hope you're having a great weekend!