I'll update more about the vacation later, but first I have to share a strange situation I've been having with Wal-Mart's web site.

I order photos all the time from them and I've been quite happy with their service up to the last few months.

Greg ordered a pool from them and created his own account in the process.

Ever since then, I've been unable to order photos online. It keeps telling me " We're having temporary difficulties arriving at the destination you requested" and will not let me complete the order.

Apparently Wal-Mart has decided we're the same person, despite having completely separate emails, passwords, and user names. They sent *me* an email telling me I had unordered pictures in my photo cart (which I did), but the link took me to Greg's account without making me sign in. Since I don't have his password and it's not stored on my computer, that should never have happened.

Their customer service department seems totally clueless and it seems is doing its best to ignore me.

Thank goodness we don't have credit card information stored on their site!

I won't be ordering from Wal-Mart's web site ever again, and I want to warn everyone what happened to me.

Be very careful ordering from Wal-Mart's web site!!!! (or just dont do it!)

More of the Idaho Trip

My Dad wrote an awesome recap of our Idaho trip, so I'm going to let him narrate and I'll add occasional pictures.

We drove to Rigby on back roads and had lunch in the room at ‘Me n’ Stan’s’ (a restaurant) where we had our rehearsal dinner on August 30, 1968. We ate a local specialty, scones with honey butter. We drove to Mom’s where we sat with Paula, Mel, Pam, and Mom while they ate and we all had dessert together.

We then went to the children’s portion of the Idaho Falls Library to check out books and reading material for the summer reading program. The railroad tracks south of the library and between it and the parking lot were about to be repaired so we looked at how the inside upper surfaces of the old tracks were worn over.

We drove to Reed’s Dairy and all bought kid’s-sized cones of ice cream, ate them in the little inside seating area (to avoid the rather intense smell of dairy cattle), then stopped at the Fiber Arts Guild meeting where Kathie took her grandchildren inside to show them off to her friends.

Bill had several meetings and worked all day.The rest of the family drove to Rexburg to meet Pam, Rachel and her kids, and Mom and Paula. They rode a wonderfully restored carousel and had ice cream and ate at McDonald’s. 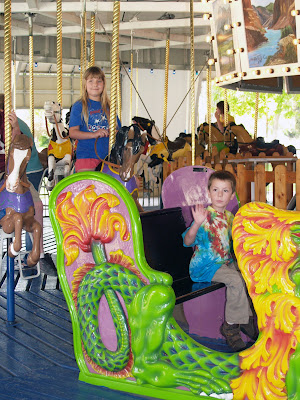 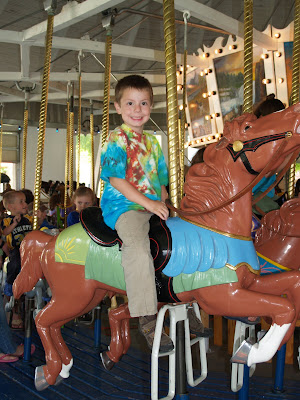 Here's Aunt Paula, who was being a great sport about riding the carousel (she's in the purple/maroon shirt in the center): 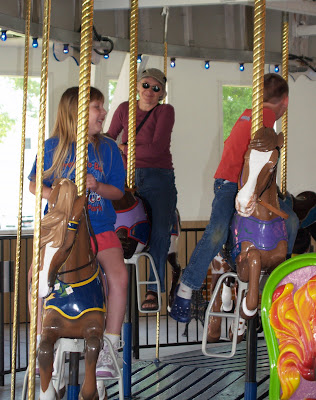 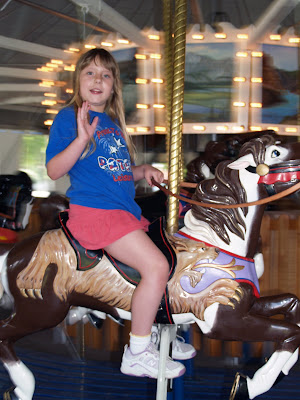 And here's Grandma and Aunt Pam: 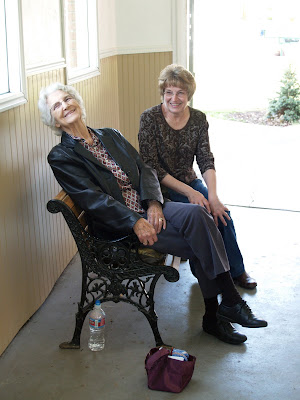 In the evening Granddad and the kids took the truck to the storage place and retrieved the camper. We all loaded the camper and Granddad mowed the lawn. It rained and got the camper wet so Granddad washed it while he had a reasonable chance of removing a year’s accumulation of bugs.

At 11 a.m., Gillian, Ryan, and Kat went for a half hour ride in a Cessna Skyhawk II, a 4 place airplane, with Bob Picker, flight instructor. Gillian sat in the left-hand (pilot’s) seat and flew the airplane. (Bill was about her age when he had his first small airplane ride with his Uncle Bob, his mother’s brother, from the Sayre farm in to .)

Gillian turned the airplane using the wheel – her legs were too short to reach the rudder pedals so Bob operated them for her and took off and landed. The flight was an ‘Introductory Flight’ and featured a thorough pre-flight inspection where Bob patiently explained the airplane and what he was looking for during his inspection.


Here's a view of the mountains to the east, with the Grand Teton just peeking above the closer mountains in the very center. 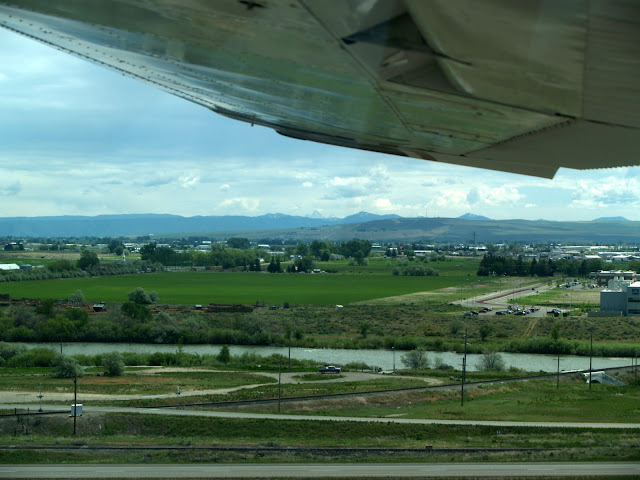 Gillian made a sharp turn and I was surprised to be looking straight down at Idaho Falls. 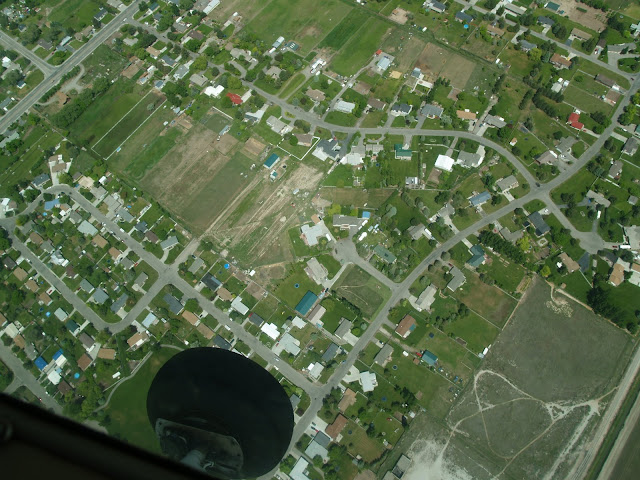 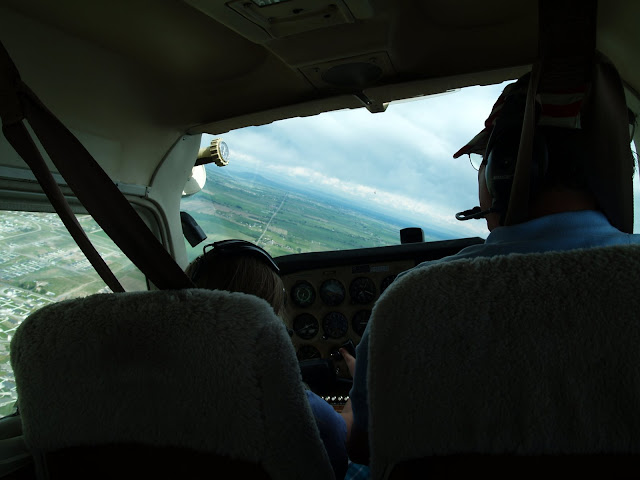 The Snake River, with the falls in the center. 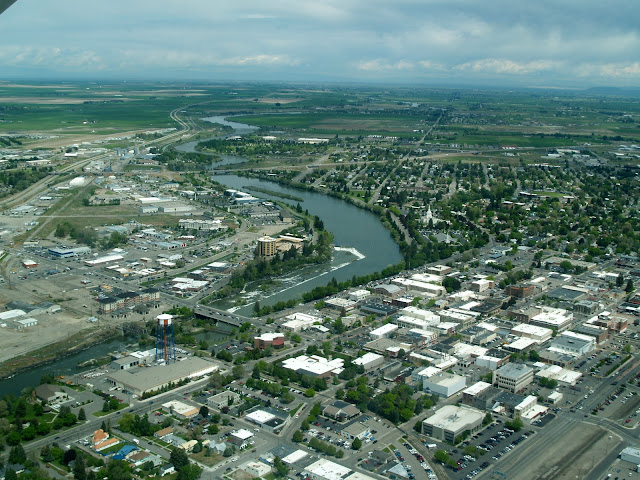 By 2 pm we were on our way to with Ryan and Bill in the truck and the ladies in the Avalon. We stopped at ‘Dave’s Jubilee’ in Ashton for fuel for the truck, a big bag of salt water taffy, a small ice cream for everybody, and a potty stop. Gillian asked as we entered the store if it was where we bought salt water taffy last year. What a memory! Later whenever Ryan didn’t like a piece of it, he’d spit it out. The Tetons were spectacular to the east.


I'm going to end this post here, as the next post will have a *lot* of pictures!
No comments:

Holy cow, where did the month go?

I just realized that it's been a month since my last post. No wonder my sister has been bugging me about updating!

At the moment the kids and I are in Idaho visiting my parents, and we're having a great time so far.

This morning we were supposed to go for a small airplane ride but since it was raining, we rescheduled for Thursday morning. Let's hope it clears up by then!

So instead of going flying, my Dad pulled out his neat trains, which are incredible moving works of art. They've got working parts and make all kinds of neat noises.

Here's GrandDad running the train for the kids: 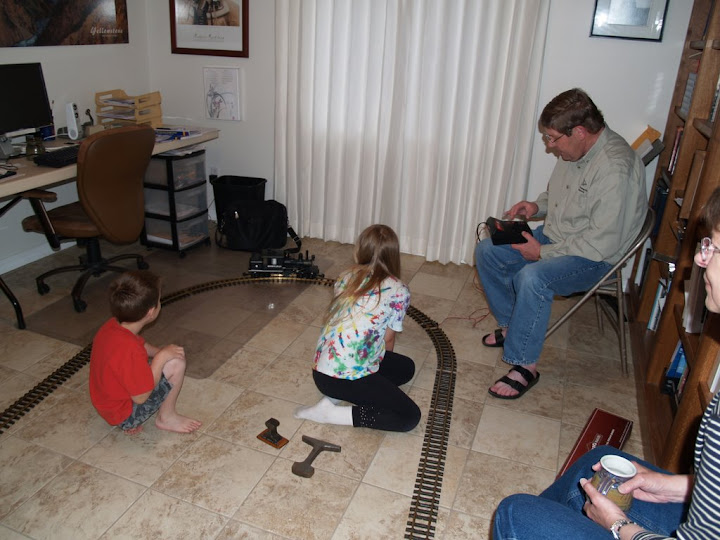 Ryan was really enthralled with them: 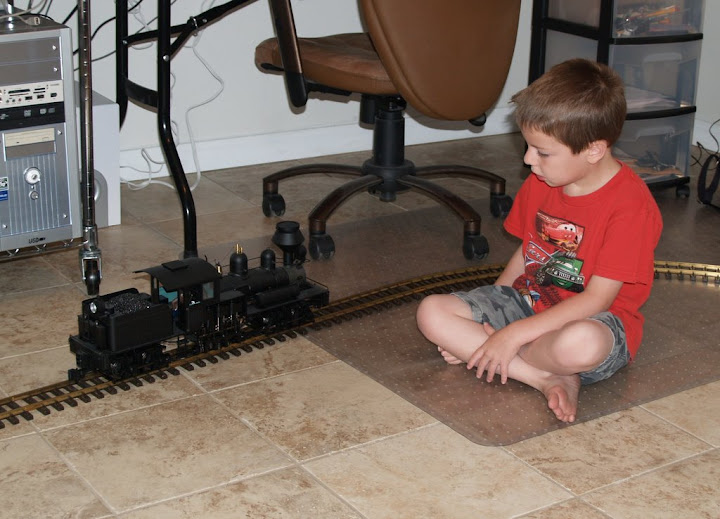 Both kids decided to be bridges: 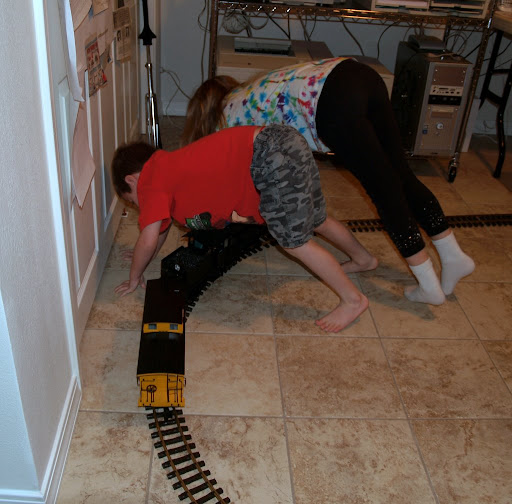 The trains were definitely a big hit!


After that we went up to Rigby and ate lunch (and delicious scones!!) at the same restaurant where my parents had their rehearsal dinner 41 years ago. After that we went to visit my grandma and saw three of my aunts. It was a fun, but brief visit.

Yesterday we went to the Titanic exhibit at the local museum, and it was neat but sad. I learned a ton of things about the Titanic and its sinking, and the kids had a great time feeling the big chunk of ice they had in the exhibit.

Sunday my Dad took the kids to wash the car and run an errand while my Mom and I went to a bead show. It only had two vendors, but we got some neat stuff!

I got some purls. This is the dark strand: 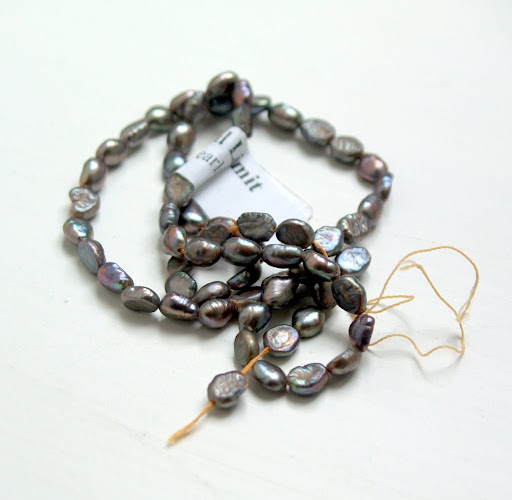 And I also got two light blue strands: 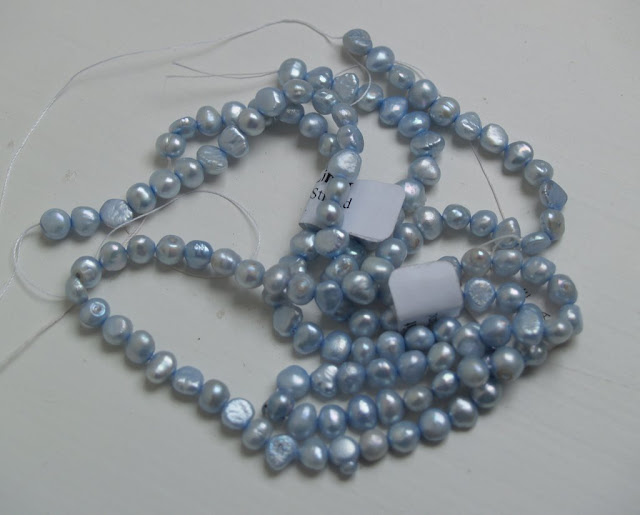 I also got this round bead that I'll use with the stone beads below for a necklace: 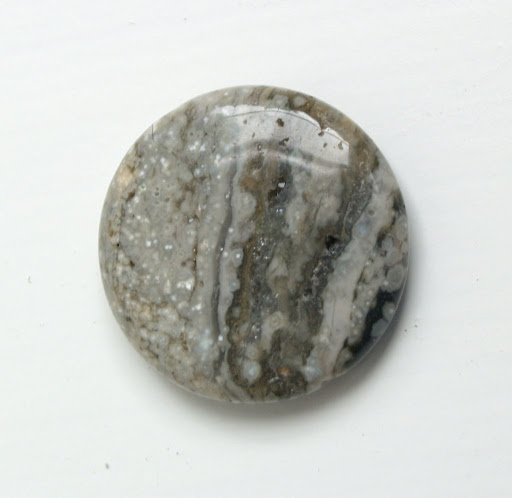 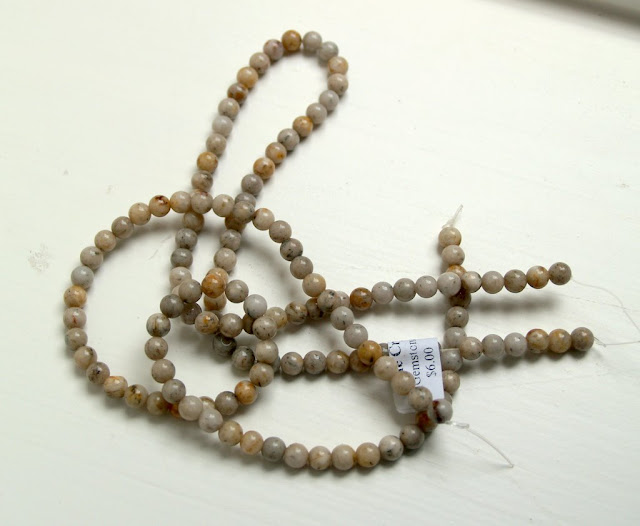 I'm really excited about this Labradorite. I've been looking for some for a while, and my wonderful Mom bought this strand of beads and single large bead for me: 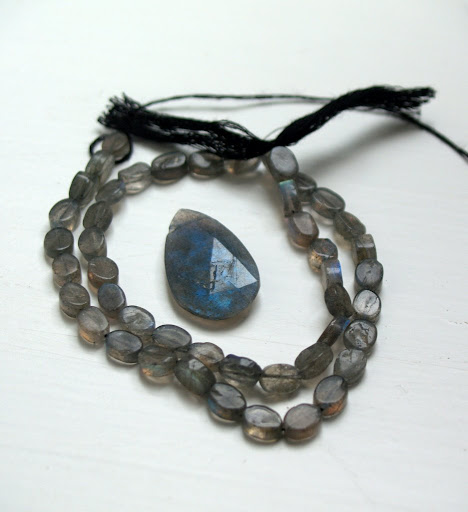 The picture doesn't do it justice. The beads flash with iridescence like fish scales.


I also got a little bit more done on my brown socks: 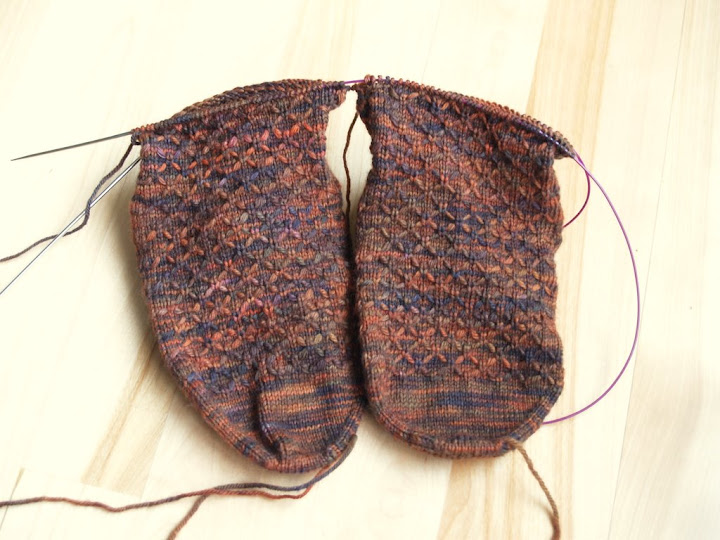 So that's about all I can handle for the moment. I'll work on another post tomorrow.