I really am an airhead lately

I was just looking over my previous posts and realizing that I hadn't included some of the recent happenings. (Pictures toward the bottom.) Refill your coffee mug before you read this 'cause it's a really long post.

I did end up getting all of the ribbons on my fair items, which is great! At the October K.N.I.T. Guild meeting I was recognized as the Best of Show winner for knitting, which is cool. The president cracks me up--she's queen of backhanded compliments. She congratulated me and then went on to say something along the lines of "but it's not hard to enter, and you can win with just about anything." ROFL!! Some of the people there told me later that they were rather taken aback, but I think it's funny. I don't think she means it in a mean way, she's just not really thinking about what she's saying.

My birthday was one week ago and it was by far the worst I've ever had. Except for my wonderful husband taking me out to dinner--that part was wonderful! The truck died again, with the same exact thing as the week before. Turns out, $650 later (plus the $160 the previous trip that didn't' solve the problem), that a chip in the steering column was dying and wouldn't recognize any key, so it would shut off the gas. Until this time around it was only doing it intermittently so it didn't strand me. So not only was the truck dead, but Gillian was very late to school since we had to walk and were already running late. That was probably the fastest I've ever walked that .65 mile and I was "glowing" by the time we got to the principal's office. I will never own another American car. That brings us to $2,000+ this month on repairs for that truck. And it's a 1999. Enough about car trouble!!

I did get some wonderful birthday wishes from my sister and many internet friends, and my parents sent me some money (which I'll be spending on YARN of course) as well as serenading me with the traditional trombone rendition of "Happy Birthday" which I love. My aunt Melanie sent a wonderful hand-made card which I always enjoy. I also got a phone call from my friend Heather, which was really nice. Rori emailed me a big happy birthday wish, and Tracy, with whom I spoke at least twice that day, totally forgot but called me the next day, embarrassed. (*snicker* Hi, Tracy! LOL!) I hope I didn't forget to mention anyone.

On the knitting front, I got four hats finished to send for Caps for a Cure although I haven't gotten them sent out yet. Gillian was graciously consented to having her picture taken as long as I didn't interrupt her game. She had 10 minutes until bedtime and she wanted to squeeze the most out of every second before bedtime while playing computer games.

This first hat is for a young child. My children both have big heads so it's small on her. The yarn is Bernat's Satin yarn in the color "Sunset." I got the yarn, a pair of needles, and a DVD on knitting from Leisure Arts through this link, and it was supposed to be made into a hat for the "Caps with a Conscience" campaign. Since the hat came out too small for an adult I'm going to send it with my Caps for a Cure hats and make a truly adult-sized hat for the "Caps with a Conscience" campaign. 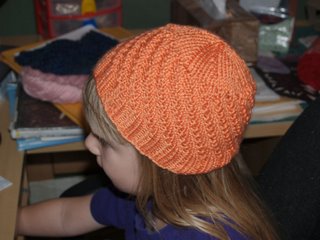 The white hat is from Caron Simply Soft yarn and the pattern is here. It's big on Gillian, but then she's five. It's actually a touch small on me but most hats are. 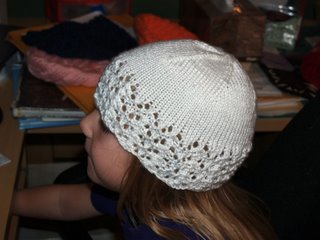 This hat is Odessa from Grumperina and it was a fun knit even without the beads. The yarn is also Simply Soft. I'm having a terrible time finding nice machine-washable yarn that's not too expensive and available locally so a lot of my charity knitting is from this yarn. 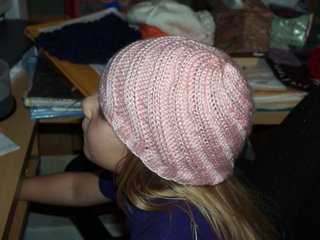 And my final finished hat is made from Caron's Simply Soft Shadows. I really like this yarn! It's a bit heavier than the standard Simply Soft, more like a true worsted than the almost DK-weight of the regular yarn. It was a REALLY bad picture of me, taken by holding out the camera, so I cut out everything but the hat. 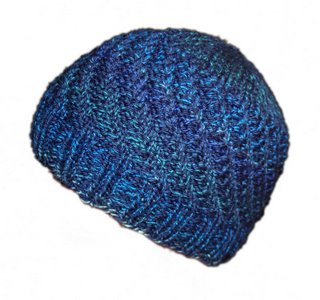 And now for the main distraction in my/our life/lives, the shower remodel!

Greg and I actually used this shower this evening and it was wonderful. The rest of the bathroom looks like hell, but the shower looks great! 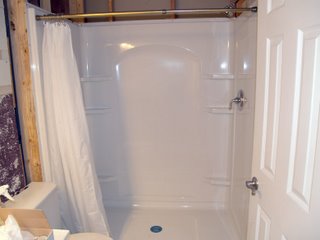 It looks wonky in the picture but that's because I couldn't get a good camera angle in that little room. It took Greg a while to get the back panel in since the framing isn't square anymore (the house is 30+ years old) and then we had to struggle a little with installing the control and handle, but we got it! We're debating on whether or not to put in a shower door and/or to replace the tile on the floor and the toilet. The toilet keeps leaking from one of the bolts. This project could keep growing, though, and I'm so ready to have it done.

Here's a closer-up of the fixtures we chose: 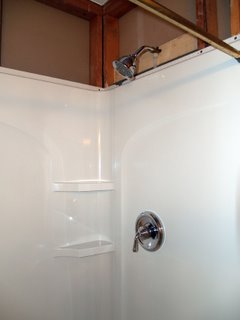 Tomorrow evening after Greg gets home from work he'll finish putting up the drywall. I still need to scrape down the high spots on the burgundy wall so that we can texture all the walls the same. Here's the challenge I'm facing with that part, where we took down a cabinet. Still not sure what we're going to do about that... We need storage but what was there was pretty bad. 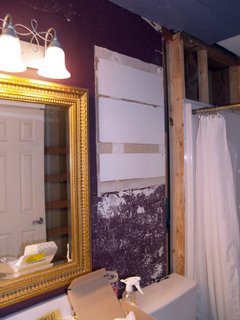 The color balance is off but the large white-and-tan area is where the cabinet was, and the splotchy area below it is where I've scraped off some of the very irregular texture. Lots more to go....

And if you've made it all the way to the end of this extremely long post, congratulations!!